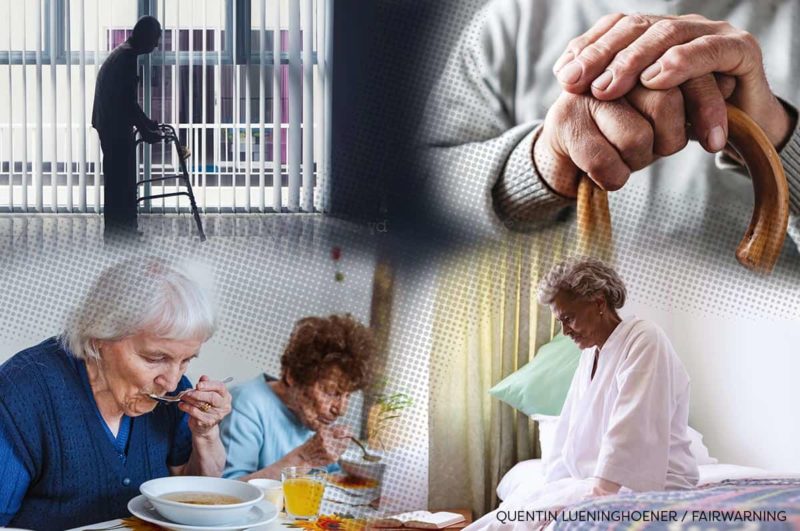 “There’s a huge underreporting of food issues,” said Charlene Harrington, a nurse and professor at the University of California, San Francisco, who has done research on the quality of nursing homes.

FairWarning’s investigation, based on inspection reports, federal data, and interviews with residents and long-term care experts, found that residents nationwide are at risk for foodborne illnesses from unsafe kitchens.

Across the United States, 230 foodborne outbreaks were reported in long-term care settings from 1998 to 2017, according to the Centers for Disease Control and Prevention. The outbreaks resulted in 54 deaths, 532 hospitalizations, and made 7,648 people sick – all numbers that experts say are almost certainly undercounted.

Not all foodborne illnesses in long-term care facilities are directly caused by poor sanitation; rather, some outbreaks are due to contaminated food brought in from the outside.

Foodborne illnesses are a threat to any age group, but especially those who are over the age of 65 due to their weakened immune systems, chronic diseases, immobility, and age-related changes to their digestive system.

Unsafe food handling was the third most cited violation in 2018 inside America’s estimated 15,700 nursing homes. Nearly 33% of nursing homes were cited for violating federal requirements to store, prepare, and serve food safely.

Federal data shows even larger nursing home chains have worse track records. For example, Genesis HealthCare is the nation’s largest for-profit nursing home chain with more than 400 facilities in 27 states. Genesis had more than 43% of its nursing homes cited for food safety violations at some point in 2018.

Genesis spokeswoman Lori Mayer acknowledged the compliance issues by stating they are “working diligently to resolve any problems as quick as possible.”

In July 2019, the Trump Administration moved to roll back a series of protections for nursing home residents, including one that would lower the qualifications for directs of food and nutrition services.

Long-term care advocates blame safety problems on operators that are intent on increasing profits that they’re willing to skimp on residents’ dietary needs.

One Arkansas nursing home was found to be cited seven times in the last three years. The Waters of North Little Rock, previously known as the North Little Rock Health and Rehabilitation Center, was cited for food safety violations such as unsealed food in storage, grimy kitchen appliances, and cross contaminating food by staff touching residents’ food with unwashed hands.

The Water of North Little Rock was cited for a sixth time in July 2018 when a government inspector asked the director of nursing if she would eat any of the food that was prepared in the facilities kitchen.

“No,” the nurse responded.

The 140-bed facility is under new ownership as of 2019 according to public documents. FairWarning found the food safety problems at the facility had been corrected; however, the home was cited again in April 2019 for staff with unwashed hands, expired food, and dirty equipment.

Assisted living centers may be worse according to food safety experts due to the lack of federal oversight.

Audrey Kelly, a resident of Los Angeles, said she moved her 98-year-old mother out of an assisted living facility quickly after a caregiver reported finding a cockroach in the kitchen and filed a complaint with the California Department of Social Services. “It’s not right,” Kelly said. “It was really disgusting.”

Another Georgia woman described her assisted living facility in Atlanta that she’s spent several times confined to her bed because of food-related illnesses.

Health officials in Colorado were alarmed by a 2016 study showing long-term care facilities had a higher rate of food safety violations than restaurants and other similar retail food establishments – sometimes up to 30 times higher.

States have shut down nursing home food operations due to safety problems for residents. In California, at least 3 nursing homes closed their kitchens temporarily because of unsafe conditions. Nursing homes were forced to bring in restaurant food for residents or cut a deal with nearby establishments to supply meals.

Two nursing homes in Southern California had cockroach infestations. Inspectors at a third facility in the San Francisco Bay Area discovered numerous dead flies and a “strong smell of feces and sewage” inside their facility’s kitchen.

“If you were to take those exact same problems and stick them in a Taco Bell or Bob Evans, you would never eat there again,” said Brian Lee, executive director at Families for Better Care, a Texas-based non-profit advocating for residents in long-term care settings.

“There would be such a public outcry to get those restaurants closed.”

If your loved one is living in a nursing home that has been cited for unsafe food handling, please contact one of our experienced nursing home abuse attorneys at Dinizulu Law Group. Our attorneys know when your loved one is being treated unfairly and we work to seek the justice they deserve. Call our office at (312) 384-1920 for a free consultation or visit our website for more information.