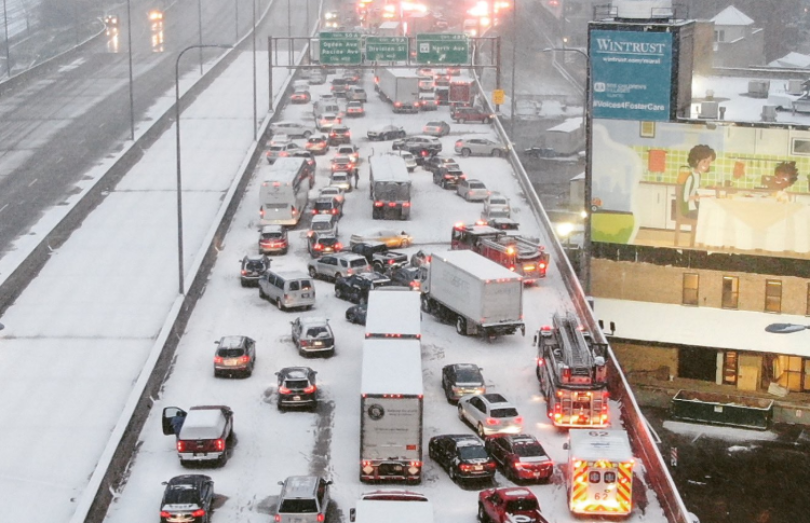 Snowy, click conditions led to a massive multi-vehicle car crash on the Kennedy Expressway Wednesday morning, sending 14 people to the hospital. The Chicago Fire Department the vehicles involved in the crash were in the inbound lanes near North Avenue around 5 a.m. Officials attribute the crash to “low traction on the expressway” and drivers speeding, according to the Chicago Tribune. Snow had been falling during the early morning, contributing largely to the accident.

The 14 people – all adults – were transported to St. Joseph’s Hospital, Sts. Mary and Elizabeth Medical Center, and Northwestern Memorial Hospital, all with minor injuries. Authorities shut down the expressway at North Avenue for hours to clean up the crash, with at least a dozen Illinois Department of Transportation (IDOT) vehicles towing away cars that are no longer drivable.

The Illinois Department of Transportation released a statement, saying:

IDOT crews were called in at 1:30 Wednesday morning and those numbers continued to escalate as the forecast changed and the event intensified. At one point, IDOT had approximately 70 trucks on the road spreading salt and de-icing materials.

We do believe that the low traffic volumes as of late have increased speeds, resulting in many of the spinouts and crashes this morning. Traffic counts have been cut in half over the last month. As a result, n speeds on the expressways have been very high and traffic is moving too fast for current conditions.

In 2017, there was a total of 311,679 crashes that occurred on Illinois roadways, according to the IDOT. Approximately 854 crashes occurred per day in 2017; furthermore, 10 persons were injured per hour, and nearly three persons were killed per day due to traffic crashes in 2017.

Driving in the snow and ice create for dangerous road conditions, especially when speeding. If you’re driving in the snow, it’s important to remember to drive slow, accelerate and decelerate slowly, and increase your following distance.