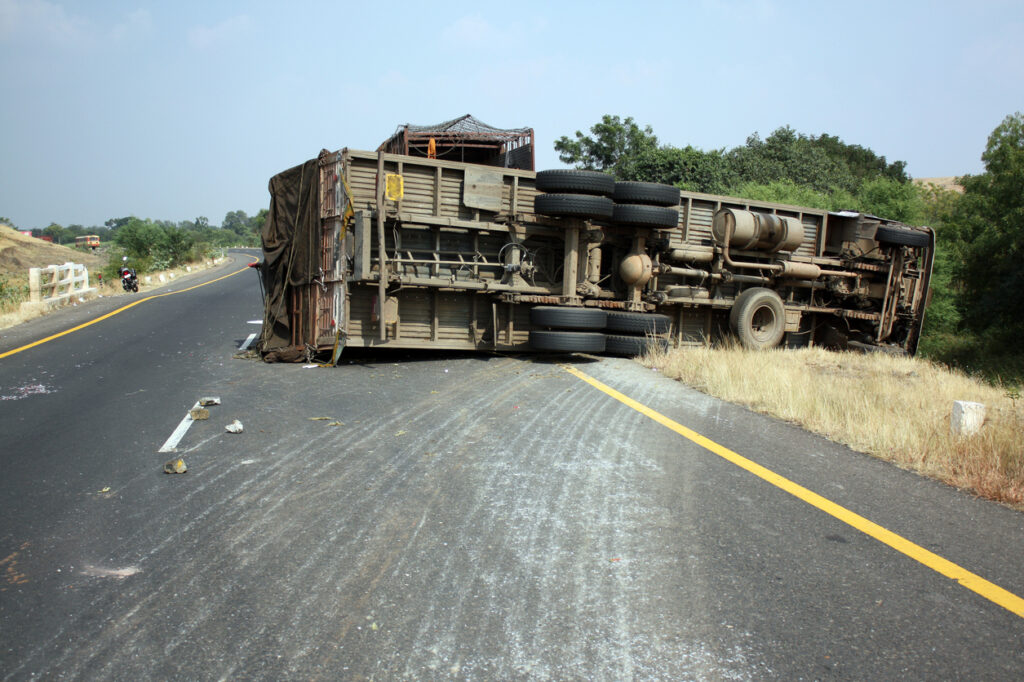 It was a sight many won’t ever forget. On Thursday, June 11th two tractor-trailer trucks caused separate accidents on I-57 near Mattoon, IL that lead to deaths, injuries, and damaged vehicles. The first incident that occurred involved a tractor-trailer being driven by Jonathan S. Turner, 53. The Journal Gazette & Times-Courier reported that while Turner was driving on the interstate, he left the southbound lanes and crossed the median. Although the source did not specify whether Turner crashed into any other vehicles, it does say that Turner along with a woman who had been driving a pickup truck, suffered injuries.

Naturally, the incident led to delays on the interstate as traffic began to build while cleanup crews and first responders worked to clear the scene. Unfortunately, the heavy traffic served as a contributing factor in the second tractor-trailer accident. The news source reported that a second tractor-trailer, being driven by Andrzej Poprawa of Palm Coast, Florida, approached the traffic and failed to slow down in time. Poprawa collided with the stopped traffic which caused a chain reaction crash to occur.

The vehicle Poprawa first crashed into was occupied by Peggy Malcom, 78, and Brad Malcom, 50. Poprawa, Peggy Malcom, and Brad Malcom all suffered fatal injuries as a result of the truck crash. After striking the first vehicle, Poprawa’s truck then hit other vehicles forcing them to collide with other tractor-trailers, reports the news source. One of the vehicles the truck hit was being driven by Ricky L. Robertson who had to be transported to an area hospital.

Who is liable for an accident involving a commercial truck?

Commercial trucks play a very important role in our economy as they are responsible for getting goods and materials from one place to the next. Unfortunately, commercial trucks are sometimes responsible for causing accidents, most of which result in severe or fatal injuries not to mention significant property damage. If you were involved in a truck accident in Chicago, IL or a neighboring city and are looking to hold the truck driver liable for the impact the accident has had on your life and physical abilities, it’s time you contact Dinizulu Law Group, Ltd. to speak with a Chicago, IL truck accident lawyer.

Truck accident cases differ from those involving passenger vehicles as there is typically more than one party involved. It is for this reason and several others that you should consider retaining a truck accident lawyer in Chicago if you are thinking about filing a personal injury lawsuit against the liable party.

Determining the Liable Parties in a Truck Accident Case

In the event the accident you were involved in was brought on by someone else’s negligence, you may be able to file a lawsuit against the party and even recover compensation from their insurance carrier for the injuries/damages you suffered. So, who might these liable parties be? The truck driver? Another vehicle that was also involved in the accident? The fact is, it could be both. To help you identify who the liable parties might be in your case, below are a few potential parties who may have contributed to causing the wreck you were involved in.

Most vehicular accidents that occur on U.S. roadways are caused by driver error. If the truck driver was engaging in any type of careless or negligent behavior, he/she could be held accountable for providing you with compensation for your injuries/losses. Negligent behavior includes, but is not limited to, driving while impaired, driving drowsy, traveling too fast for roadway conditions, transporting a load that exceeds state and federal weight limitations, driving for a period longer than he/she is legally permitted to, etc.

If a trucker’s employer allowed them to engage in behavior that violates state and federal regulations (i.e. work for periods longer than they are legally allowed to), the company can also be held accountable for the accident.

Let’s say the truck driver crashed into the back of your vehicle because he was unable to stop in time to avoid an accident. At first, you might assume the trucker was careless, distracted, or driving too fast for roadway conditions which is why he couldn’t avoid hitting you. But after a thorough investigation was conducted, it was determined the brakes were defective which is why he rear-ended your vehicle. In this case, you may be able to bring a lawsuit against the manufacturing company that sold the defective parts or even the party responsible for inspecting the vehicle before it set out on its trip.

Now, if you think you have a case against any of the parties listed above and wish to discuss how much you might be entitled to collect for your injuries, contact Dinizulu Law Group, Ltd. now to speak with one of our skilled Chicago, IL truck accident attorneys.

Dinizulu Law Group, Ltd. can be reached at: