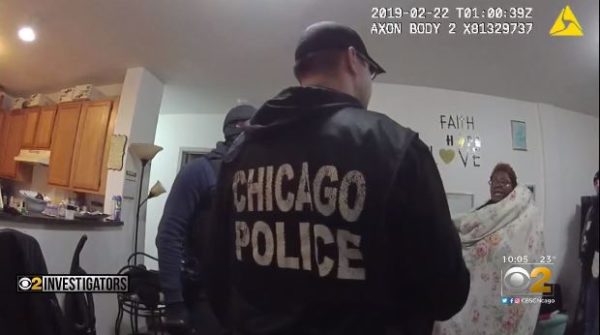 CHICAGO, IL – Police body camera footage was released on Tuesday and shows what happened to an innocent woman nearly two years ago when police officers wrongly entered her home with guns drawn and handcuffed her naked while she watched the horrific scene unfold.

Anjanette Young filed a Freedom of Information Act (FOIA) request last year and recently obtained the footage after a court ordered the Chicago Police Department to turn it over as part of her lawsuit against police, according to CBS Chicago.

The video shows on Feb. 21, 2019, nine body cameras caught a group of male officers entering Young’s home at 7 p.m. Young had just finished her shift as a licensed social worker at a hospital and was undressing in her bedroom when she heard a loud, pounding noise.

Officers repeatedly struck her door with a battering ram. From various angles of the footage, the video captured the moment officers broke her door down.

Young remembers officers yelling, “Police! Search warrant,” and “Hands up.” Moments later, Young is seen naked in the living room with her hands up. An officer can be seen eventually handcuffing her.

“What is going on?” Young yells in the video. “There’s nobody else here, I live alone. You’ve got the wrong house.”

An officer found a blanket and wrapped it around Young as she cried asking officers who they were looking for. The blanket began to slide off and expose her body in which no officer made an attempt to cover her.

Young can be heard telling police at least 43 times they were in the wrong home. She asked police to allow her to get dressed and informed them they had the wrong information.

“Oh my god, this cannot be right. How is this legal?” Young said during the raid.

According to CPD’s complaint for a search warrant, a confidential informant told the lead officer of the raid that he recently saw a 23-year-old man who was a known felon with a gun and ammunition.

Despite police making no effort to independently verify the informant’s tip, such as conducting surveillance or any other policy checks, the search warrant was approved by an assistant state’s attorney and judge.

The informant gave police the wrong address; the suspect police were looking for lived in the unit next door to Young’s and had no connection to her.

Body camera footage also raises questions about the approval of the warrant. In one clip, officers can be heard talking saying the warrant was not initially approved.

“What does that mean?” the second officer asked.

“I have no idea,” the first officer said. “They said it was approved, then I guess that person messed up on their end.”

This is not the first time police have failed to do basic routine checks regarding bad information given by an informant.

Young said the way officers treated and spoke to her during the raid caused her experience to be more traumatic. You can see in the footage she’s visibly upset pleading with officers to tell her what was going on.

The sergeant asked Young if there were any firearms in her home.

“There’s no guns in here,” she said. “I’ve been a social worker for 20 years. I follow the lwa. I don’t get in trouble for anything. I don’t do illegal stuff. I’m not that person. You have the wrong information.”

The sergeant told the affiant officer – the officer who received the warrant – to step outside.

“I want to have a conversation with you,” the sergeant said.

After nearly 20 minutes, police remove the handcuffs. Towards the end of the raid, the sergeant apologized to Young.

“I apologize for bothering you tonight,” the sergeant tells Young. “I assure you the city will be in contact with you tomorrow. I apologize for meeting you this way. I will do everything I can to get the door fixed.”

Young said it was “surreal” to watch the footage back two years later. She continues to live with trauma and leans on church and her faith for support. She believes she has a responsibility to use her voice to protect others from being in the same situation.