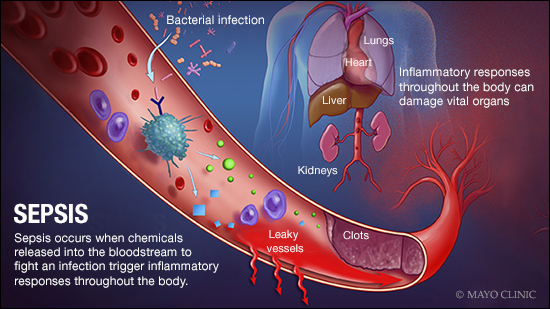 CHICAGO, IL – Infections are one of the leading causes of death in nursing homes throughout the country. Unfortunately, nursing homes can be inattentive to the conditions that give rise to infections and then leave the infections untreated, putting nursing home residents at risk.

An infection that is left untreated can turn into a very dangerous condition called sepsis. When someone develops septic shock, this is how an infection can kill. Sepsis happens when an infection you already have – in your skin, lungs, urinary tract, or somewhere else – triggers a chain reaction throughout your body. A toxic agent is introduced into the bloodstream because of the infection and will begin to result in organ failure. If you do not seek medical treatment in a timely manner, sepsis can rapidly lead to tissue damage, organ failure, and death.

There are numerous symptoms that may occur, with some of the more severe ones including:

The Stages of Sepsis

Sepsis can be difficult to identify but is typically denoted by a very high or low body temperature, high heart rate, high respiratory rate, high or low white blood cell count and a known or suspected infection. For sepsis, two of the mentioned SIR signs, as well as an infection, must be present.

Septic shock is the most severe stage of sepsis. Septic shock is defined as the presence of hypotension, induced by sepsis, despite fluid resuscitation. Septic shock has the highest chance of mortality, with estimates that range from 30% to 50%.

Septic shock is accompanied by the following symptoms:

Even if the nursing home resident is about to survive septic shock, it will have long-term ramifications on their health and they likely will not make a full recovery.

Early detection of sepsis is necessary in order for a nursing home resident to have a better chance at survival; however, when a resident is a victim of nursing home neglect, they likely are not receiving the care that they need to notice the signs of sepsis and begin prompt treatment. This becomes more of a problem at understaffed nursing homes that are prone to neglect.

Medical Treatment for Patients with Sepsis

When a nursing home does diagnose and treat sepsis, the course of treatment begins with antibiotics. Some patients may need to have procedures to remove dead skin or tissue depending on the severity of the infection. Patients may also need oxygen or other intravenous fluids to maintain the level of oxygen and blood going to the organ so organ failure can be prevented. Patients can recover from mild sepsis in about three to ten days; however, more severe cases can take longer to recover if the patient is able to survive at all. Severe sepsis requires critical care for a month or more.

Sepsis is also how pressure ulcers can become fatal. There are four stages of a pressure ulcer: Stage I and II is the first discoloration of the skin and a small ulcer. Stage III is when a small crater in the skin begins to degenerate to a Stage IV pressure ulcer where the hole in the skin gets deeper and can reach the muscle. When the hole in the skin becomes large enough and is untreated, the resident can develop sepsis from the infection. A pressure ulcer can become septic, though the ones that are more advanced have a higher change of becoming infected. The wounds can leak puss and give off a foul smell. There can also be an increased in pain in the area and a fever.

Pressure ulcers should not form in the first place, but if they do, they should not reach the level of sepsis. If your loved one has developed sepsis, there is a high chance that the nursing home did not provide the level of care that it was legally obligated to, causing your family member to develop a life-threatening infection.

Nearly 25,000 residents in nursing homes will die from sepsis, and most of these deaths are preventable. Thousands of nursing homes each year are cited by the federal government for their failure to prevent and treat pressure ulcers.

Has Your Loved One Been Injured by a Nursing Home’s Failure to Treat an Infection? Get Legal Help Now

The experienced attorneys at the Dinizulu Law Group have handled numerous cases over the years where nursing home residents have died from infected pressure ulcers and other severe infections due to nursing home negligence. If your loved one has been injured or died from neglect at a nursing home, call us today at (312) 384-1920 to set up your free consultation. Please visit our website for additional information.